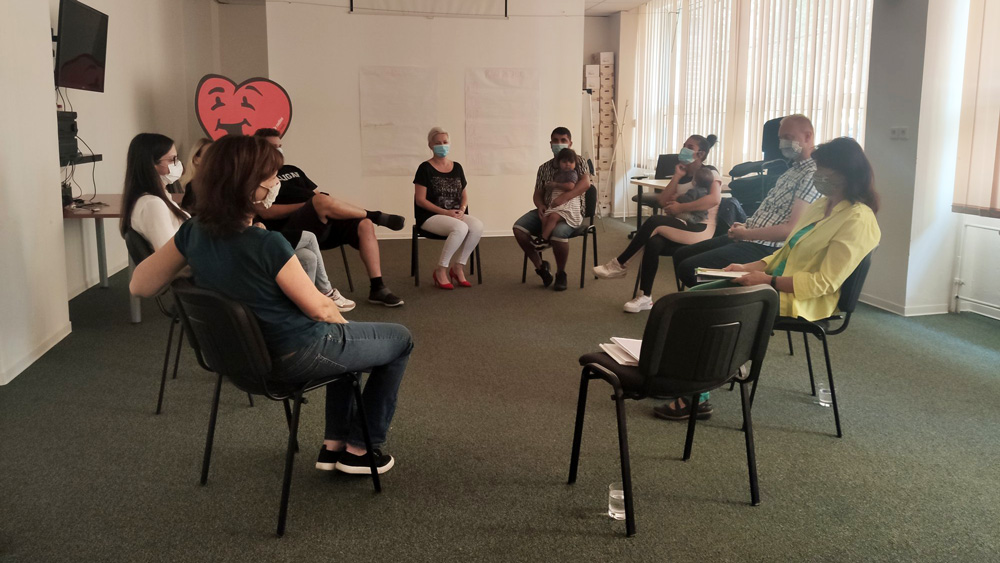 First experience in implementing the FGC model in 2007 was encouraging, bringing real solutions, while eliminating inadequate interventions, life continuum interruptions as well as the loss of both personal and family identity of the children at risk within the child protection system.

The professional team of Úsmev ako dar (UaD) got the initial information on the FGCs in 2006. Our first trainers were Marilyn Taylor, Daybreak, UK and Rob van Pagée and his co-workers from Eigen Kracht Centrale, Netherland who still have been our coaches and mentors.

After viewing the model and comparing the implementation conditions, we started to prepare the first groups of FGC coordinators and educate social workers. Over a decade, more than 30 coordinators have been trained and regularly supervised and are ready to prepare the conference whether the referral comes from the child protection body, local self government, school or the member of the child at risk broader family system. The FGC model implementation team headed by Monika Miklošková (under the Úsmev ako dar) train, coach and supervise the FGC coordinators across Slovakia and provides nation-wide supervision and teambuilding activities for the FGC coordinators.

Based on the particular needs of the Slovakia´s regions, there have been implemented educational seminars for professionals involved in the child protection system who can address a particular certified coordinator for the family at risk. Thanks to the thorough education and awareness raising, family group conferences have become a well-known model of social work with families in Slovakia.
So far, Úsmev ako dar have done more than 170 FGCs. Our results roughly copy the outputs of our more experienced foreign partners.
Based on the findings of the FGC research qualitative and quantitative study in Slovakia, which included 130 of analysed FGCs, involving 26 regional child protection authorities and 21 children’s homes in the period of 2007 – 2016, we monitored supportive and risk factors of applying the FGC model in several categories.

The identified factors of FGC benefits and threats have been categorised into those having been seen positively by the participants (professionals and members of the family network) as empowering, motivating, and those having been perceived as unpleasant and threatening by the family members and professionals during the FGC process. Naturally, a lot of FGC participants felt initial concerns about the judging nature of the conference, the guilt of the developments in their broad family, the fear of loss of control over the situation, the inability to meet expectations, the presence of people with broken relationships or contacts, or the attitude of professionals – social workers.

Supportive factors:
• Improving relations within the family, releasing tensions
• Better understanding of the issue threatening the child and its context
• A clearer idea of the following steps to address the child’s situation
• A comprehensive solution to the situation in the family
• Involvement, initiation of a broad family support network
• Re-linkage to previous support relationships or creating new ones
• Confirmation of the family members´ self-esteem
• Confirmation of the family members‘ feeling of belonging to a wider family system
• The opportunity to take an active part in making plans for a child and family
• The opportunity to articulate one´s emotions, feelings, fears, hopes
• „Named things cease to be destructive“
• Confirmation of parental roles in their children´s lives
• Family´s understanding of their child´s needs
• The child’s presence in decision-making, with regard to the child´s age
• The child knows his / her roots and where he / she belongs to.
• Increasing confidence towards professionals
• Feeling of acceptance of the family with its particularities by the individual subjects of the
system

Risk factors that can harm the benefit of FGCs, as expressed by the family members and other child´s close persons:
• Unaccepting attitude of professionals towards the family
• Judging, discouraging, or refusing attitude towards a child’s family
• Unprepared child – family contact after a long-term separation
• The long-term interruption of the child-family relationship continuity after the child´s separation from the family and being placed in the institutional or a substitute family care
• The absence of a wider family support network, the predominance of professionals at the conference
• Unprepared FGC participants, both family members and professionals
• An unavailable offer of potential family support services resulting from the family needs based on their plans
• The absence of the private family time
• The exclusion of a child from the process unless there are justified reasons

A few interesting numbers from the more than 10-year history of FGCs in Slovakia
• 82% of the family members, that were offered an FGC, were able to mobilise their potential and strengths and form a safe and comprehensive plan at their FGC. In some cases (18%), the family system had been so broken and the family´s social network paralysed that it was not possible to organise an FGC for the given moment. The case conference was offered to the family instead
• At 96% of the FGCs, the family´s social network formed a plan that was accepted as a mandatory plan to address the child’s situation. 2% of the family did not form a joint plan at their FGC, in 2% of the cases the FGC originally prepared was eventually held as a case conference (case conferences are called Supportive circle conferences, due to a major change in family circumstances, some members families had not come and the present part of the family formed a plan addressing the situation together with the present professionals (a plan during the private family time had not been formed).
• On average, 12 participants have taken part in one FGC, thereof, on average 8 family members and 4 professionals of the family support network.
• One plan involves on average 7.47 tasks. The tasks focused, in particular, on the improvement of the child care, help with bringing up children, addressing housing and living issues, developing parenting skills, adhering to school attendance, re-establishing a family-separated child contact, the possibilities of returning a child to the family.
• In 92% of the cases, the plan formed at an FGC was accepted and approved as a mandatory joint plan by the case social worker responsible for managing the family case – so it can be stated the FGC success rate is 92%.
• In 3% of cases, the families for whom the process of preparing an FGC had started, solved their issues during the preparation phase and the FGC alone was no longer needed.
• in 95% grandparents, uncles, aunts and cousins, foster parents, and other children’s relatives also took part.
• 63% of the tasks agreed during the planning phase were accomplished by the family members on their own, only in 37% the families needed assistance by professionals in implementation of their plans.
• 86% of the family members perceived an FGC as „good“ to „very good“ experience and would recommend it to other families.
• 93% of the family members felt they were truly heard and that they were „taken seriously“ in the FGC process by the involved professionals.
• 87% of parents said that they had received more help from their broad family after the FGC.
• 89% of parents and children said they had received more support from the social worker after the FGC.
• 94% of parents were very satisfied with „their“ coordinators.
• 76% of social workers said that the family had developed a better plan than it would have been proposed by the social workers themselves.
• 71% is the ratio of the children returned to the family after the implementation of a FGC (compared to 28% using traditional social work practices in the reference period).
• Approximately 30% of FGCs were held in Roma families.

The analysis outcomes are based on 158 family members at risk and 46 professionals and their perception of the FGC´s benefits in terms of their participation within the period of 2012 – 2016.

Within the FGC context, 10 years ago the conference model was completely unknown, or little known to social workers. After 10 years of systematic educational work done by Úsmev ako dar, the FGCs are a well-known and welcome model of the social work with families.

Involvement of conference model into the higher-education social work study has a great credit to the model recognition. At the same time a positive finding reveals that social workers in Slovakia are very open towards the FGC process and plan to implement them into their practice.

In 2017 Úsmev ako dar managed to enforce the incorporation of the model principles as a way of involvement of the broader family and other close persons into planning and decision making for a child (which had not been a common practice so far and social workers had usually made decisions and plans autonomously) into the draft law on child protection and social guardianship No. 305/2005. Now the amendment to the law has been in force since 1 January 2019. 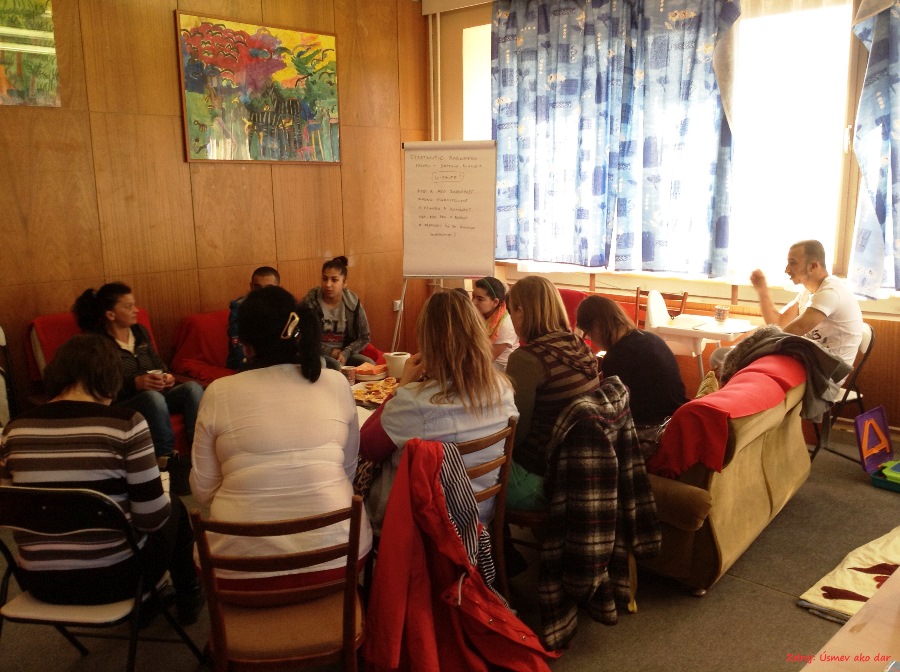